In March 2019, Italy became the first major economy to sign a memorandum of understanding on China’s Belt and Road Initiative (BRI) – an infrastructure financing program aimed at linking Asia’s trade routes with the world. Africa and Europe.

The non-binding agreement, in addition to signaling other investment opportunities, designates some of the Italian ports on the BRI trade routes, which could provide funding for infrastructure projects.

The signing is controversial as many believe the BRI is a political scheme to boost global Chinese influence through foreign investment. For this reason, Italy’s pro-China stance has drawn much criticism from other major Western economies, especially those in the European Union (EU).

Curiously, however, the polls of the four main EU economies – Italy, Germany, UKand France – show that the Italian public had the least favorable opinion of the Chinese in 2018 by a reasonable margin.

Given the controversial nature of the signing of the memorandum of understanding, it seems odd that the opinions of the Italian public do not match the actions of the government.

How the Italian public perceives China

According to data collected by the Pew Research Center, Italians have the least favorable view of China of the four countries by 10 points and the least trust in Chinese President Xi Jinping by 12 points. 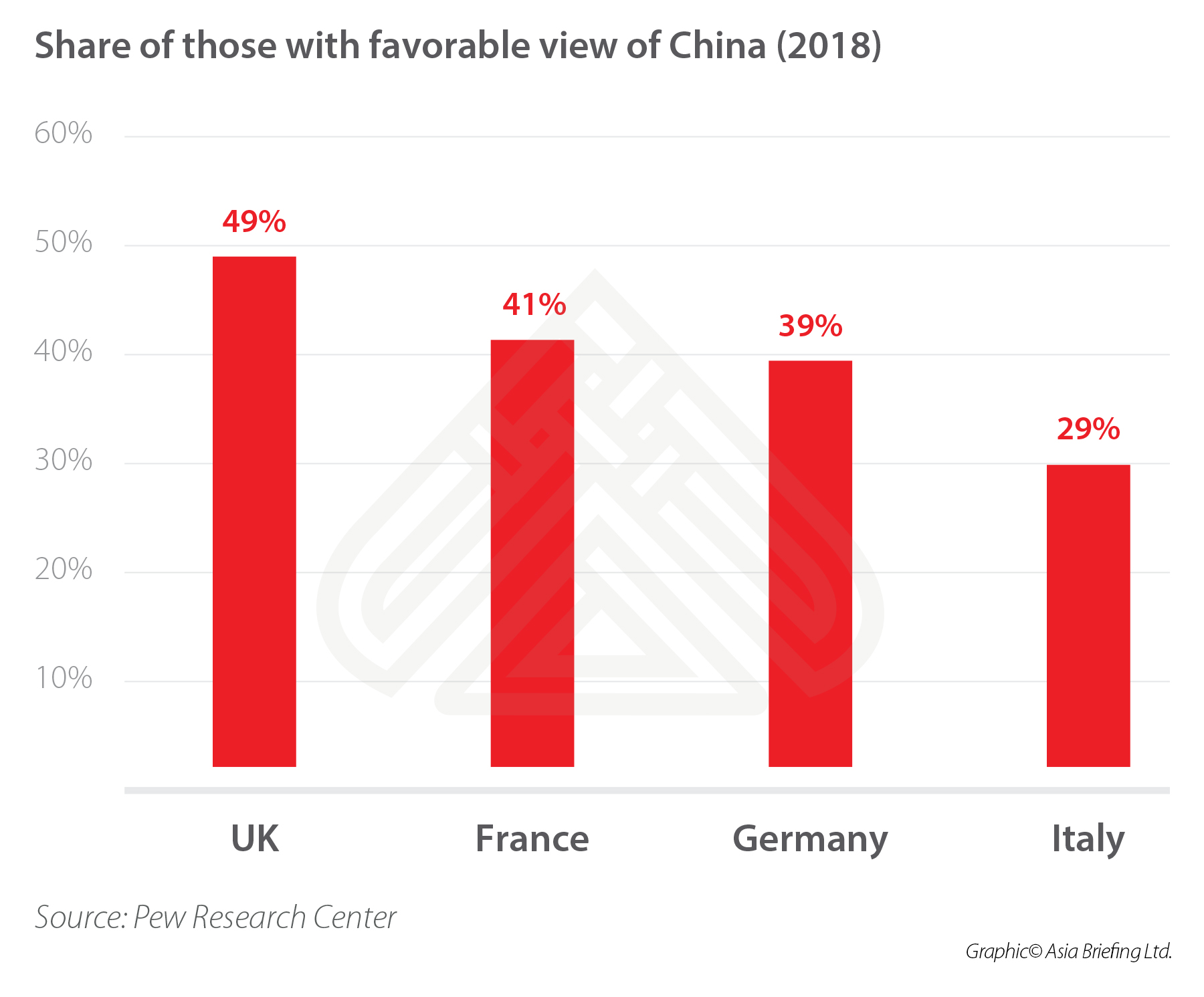 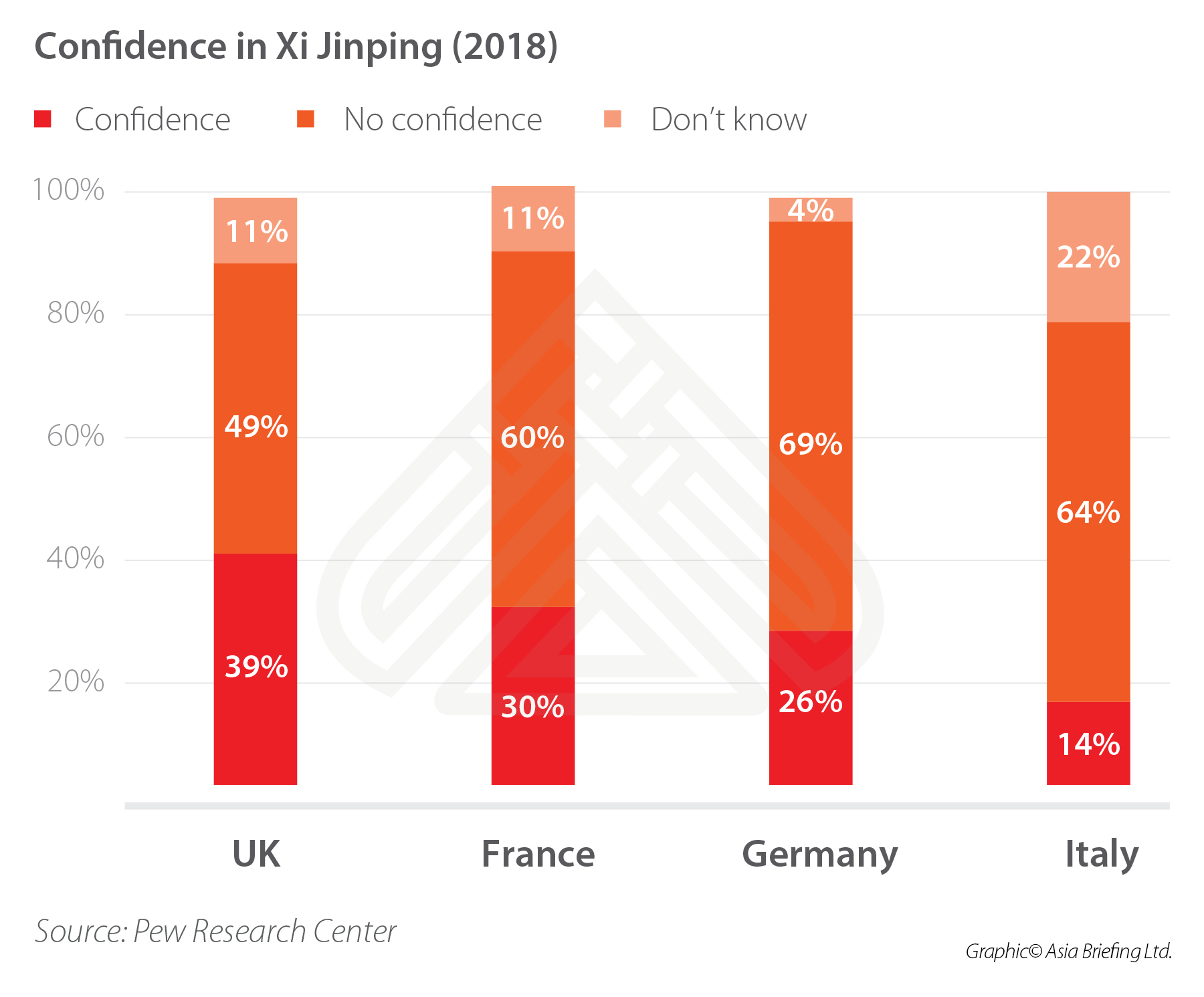 As the poll was conducted in 2018, it is possible that the public will view President Xi more favorably after his visit to Italy this year, during which the memorandum of understanding was signed.

Nevertheless, the Pew Research Center believes that Beijing’s human rights record could explain the unfavorable views towards China. Their analysis in 26 countries showed a correlation between the two points of view. But, there are often multiple factors that contribute to political opinions.

Despite unfavorable public opinion on China, Italy’s new government – formed in March 2018 by the Five Star Movement and the Lega Nord – is considerably more pro-China than the other four major EU economies.

In addition to supporting the BRI, the government said early on that it was ready to cooperate with Huawei to provide 5G network infrastructure in Italy, a move the United States has discouraged its allies from pursuing due to fears that spyware can be placed in the network.

There are two reasons for Italy’s commitment to cooperation with China despite negative public opinion: growing dissatisfaction with the EU on economic issues and the view that Italy is missed out on job-creating Chinese investment and trade.

Although not all Italians are skeptical of the EU, a poll shows that only 20% of Italians approve of the EU’s handling of economic issues. And the Pew Research Center also found that a negative view of the EU was correlated with support for the Five Star Movement. 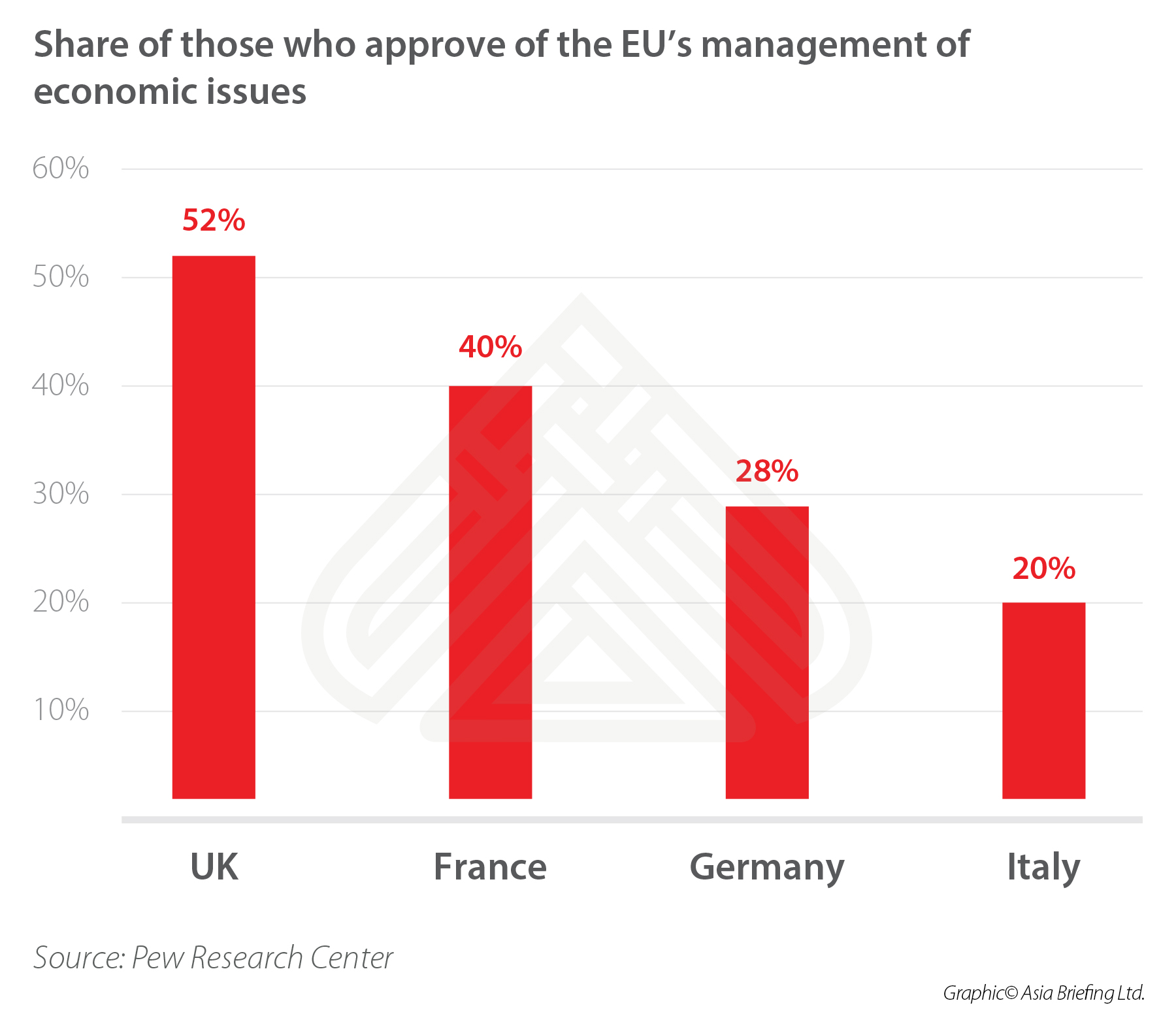 These views recently materialized in the 2018 budget, which will breach EU fiscal demands if it leaves Italy with a deficit of 2.4% of GDP for the next three years.

Breaking these rules means that Italy will no longer have access to financial assistance from the European Central Bank.

Since the global financial crisis of 2008, the Italian economy has experienced fluctuating positive and negative growth.

As Italy prepares to sever some of its economic and political ties with the EU, it sees China as a necessary alternative funding source.

Historically, Italy has received the lowest amount of Chinese investment in new facilities of the four major EU economies. Start-up investments tend to create more jobs and growth than mergers and acquisitions because companies are built from the ground up.

Spurred by economic underperformance and growing dissatisfaction with the EU, the memorandum of understanding makes Italy’s government the most pro-China of the EU’s four major economies.

The changing winds of the new government could bring more investment and possibly more trade deals to Italy. But this comes at the cost of severing some of its ties with Europe.

China Briefing is produced by Dezan Shira & Associates. The firm has been assisting foreign investors throughout Asia for offices around the worldincluding in Dalian, beijing, Shanghai, Canton, Shenzhenand hong kong. Readers can write to china@dezshira.com for further assistance on doing business in China.

The Italian government launches the process of selling ITA Airways

(Bloomberg) — The Italian government said on Friday it had begun the process of selling Italia Trasporto Aereo, the successor to bankrupt carrier Alitalia, following an approach last month by Mediterranean Shipping Co. with backing from Deutsche Lufthansa. AG. The cabinet led by Mario Draghi has signed a decree that launches the sale of the […]

The Italian government released a video game – here’s why

ITALY: Wonderland aims to help more people discover the culture and heritage of Italy. The Italian Ministry of Foreign Affairs (MFA) has launched its very first video game to help promote the country and all its beauty. Available on iOS and Andriod, ITALY: Land of Wonders aims to allow players to explore Italy through a […]